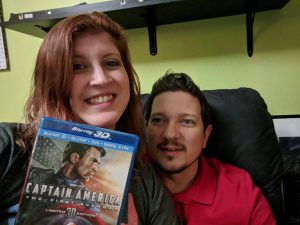 We’re starting the journey to Avengers Infinity War. This is week one. While others may be watching Iron Man, we’re watching the Marvel Cinematic Universe in chronologic order for the first time!

I can’t believe it’s been so long since we’ve watched Captain America: The First Avenger. Honestly, longer than it’s been since watching Avengers.

I can’t begin to tell you how refreshing it was to be back in the old-timey times. Everything was so much fresher back then. Not to mention, I love seeing Agent Carter with her man.

Spoilers are all up in this post, so don’t go looking for it if you’re not wanting to find it.

I was so happy to be reminded that Agent Carter and Steve Rogers DO share a first/last kiss. I had honestly thought that while watching the TV show that it had never happened. It was the dance that didn’t happen. It really is sad that their paths weren’t meant to be together.

Red Skull, as a human, omg he had SUCH an expressive face. So, seriously, What the hell? How? He didn’t have special muscles built into the underneath 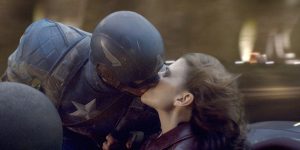 of the mask…it’s little things like that, on a second view, that kinda kills things for me. It’s unrealistic (not that ya know, it’s unrealistic for a skull to be super strong and ya know, go up against Captain America…)

OMGGGGGG Steve REALLY is soooo tiny in the beginning of this movie. He’s like OVER A FOOT shorter than Agent Carter in the car scene. I, honestly, feel like they overcompensated in that scene.

Regarding the last statement – he was so tiny. Meaning, his little khakis and white t-shirt were tiny with him, right? Then he gets his super soldier make-over, capsule opens….well, His pants aren’t even ripped!!! They’re just short…they’re like MAGIC Khakis! lol Can all mine become short when I gain weight instead of getting un-wearable?! lol

Ok…that’s that – next week: The Incredible Hulk! (apparently, this IS canon even tho it’s not the same Banner)