Late June of 2015, WalkerStalker Con came to Orlando, FL. Before the convention, I was really interested in attending it due it it’s huge guest list of Walking Dead, Gotham, and Lost actors and actresses. After you get excited about how awesome the guest list is, you start looking into those ticket prices…this is where

Walker Stalker lost me. Those prices were ridiculous…and believe it or not, people PAID THEM! $1200 for a platinum VIP pass?! I can tell you a LONG list of things that I could spend that money on for you rather than a bunch of autographs, photos, and handshakes. So, I decided it wasn’t going to happen!

But….I really -did- want to go. I didn’t want to pay tho. So, Hey, Why not volunteer?! Actually, that was a great idea.

I applied as a volunteer

I didn’t know until a week or so before that I was actually approved to volunteer for the event when I got the second batch of emails that were sent out. Then a few days before the event, I found out that I was going to be on Line Control…That seemed kind of lame. I really wanted to be on celebrity detail..oh well, it’ll be fun, right? Hopefully….

Day of! Orientation before the con opened to the guests happened at 7am. OMG! So early, it was going to be a very long day for this girl (plus I stayed up way too late the night before because a friend came into town and stayed with us…meaning Tracy and Mike had a cook out lol) You found your way to the convention hall for Orientation, was presented with a Volunteer t-shirt and then checked in. Upon check in,

I found out that I would be doing Line Control for Lennie James. I’m awful with names, characters, I’m not so bad, but actor names, I just suck. I had to sit down and google him and eventually figured out that I would doing line control for Morgan of The Walking Dead. Ok…cue excitement! Morgan is one of my favorite characters! SCORE!!!

After getting walked around and schooled on the ins and outs of Line Control for Walker Stalker…What we should and shouldn’t do and such. Next thing, I’ve found my home for the day, Lennie James’ booth and got the lay of the land. 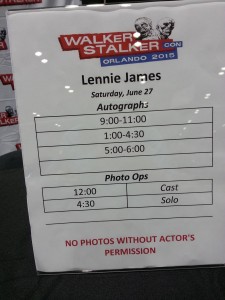 Celebrities have scheduled time in which they are suppose to be signing autographs and doing photo ops. However, it seems as if only photo op times stay on schedule. Probably due to pre-sales and such. Autographs are mainly for those that love to stand in line, it seems…Unless you shucked out that big chunk of cash to be a constant General Admission line skipped (aka VIP).

As you can see by the schedule, Lennie was suppose to be there at 9…He didn’t arrive til after 10…AND! On top of that…He already had a huge line in place. Not to mention, the people in charge of the con are starting to freak out (along with me) because I was the only Line Control person assigned to Lennie James (that showed up, I guess) and we seriously needed more room than we got for our lines. We were SLAMMED the whole day! Once he arrived, I got the low down on the RULES when it came to getting his autograph.

I was quite the line Nazi, but it super paid off because Lennie’s agent was impressed with me and I got an awesome reward for it. I got an autograph for free! OMG AWESOME!!!!

Once my day was complete, I ran into a friend of Mike’s who was running his own art booth at the con. Funny enough, he knew of me as Black Widow and Mike as Hawkeye. I finally introduced myself and told JP that my favorite piece of art of his was the Kid He-Man on the beach. If you’re reading this blog, you know that I am a huge He-Man fan and J.P. Perez Art made the cutest variation of him ever! 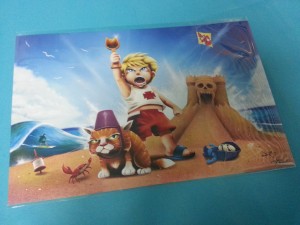 Oh! I forgot to mention the rest of the perks for volunteering…Because you volunteer for the day, you are given passes for the times when you’re not attending, or for the following day (a $45 deal), a cool volunteer tshirt, and lastly, a free autograph from anyone you want in the last hour of the con on your volunteer t-shirt. What?! Another free autograph, that’s right. You can bet I knew who I wanted to get…FUCK YEAH PENGUIN!!!!! He was a sweet heart and I had a blast coming back to the con the following day with my friends and Mike for free!! 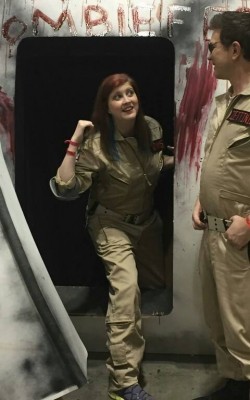 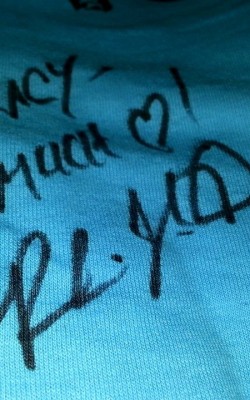 Do you have a lot of money and you’re celebrity crazed? (omg some people are seriously insane over Norman Reedus…the screams! the screams!) Then you will get a lot out of WalkerStalker….and WalkerStalker will get a lot out of you (money I mean). You pay to get in…and everything else is set up to pretty much take your money. If you’re the kinda fan that really likes the opportunity to stand in line to meet celebs, this is the con for you. You really can’t beat the sheer AMOUNT of guests there were, many of whom you could literally just walk up and say hey to. Others, however, will charge you for a selfie (when did that seriously become something that people could charge for?!) I had a fun time, but I wouldn’t do it again without also volunteering….those ticket prices and then all the money black holes upon entry just doesn’t work out for us in our financial situation. OH! The Panels! Go for the panels! Easy to sit in on, easy to find, easy to hear, and up close! That made it worth it!