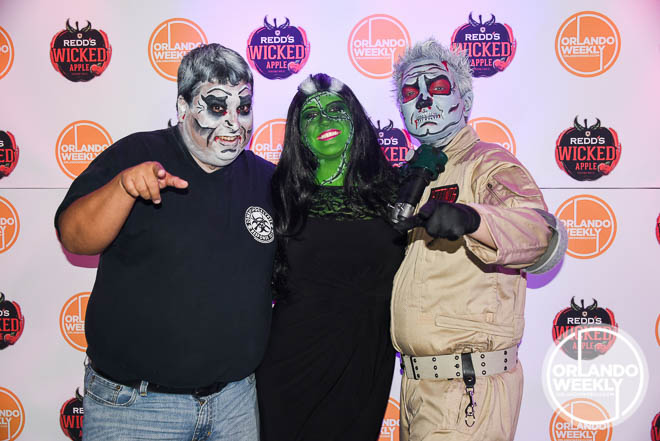 This year was a rare one for both Mike and I in the respect that we had literally no idea what we wanted to wear for any of our planned Halloween festivities. As you should know by now, we regularly dress up in our hand-made costumes for charity work and the last thing we want to do is wear one of these costumes to a night-life kind of party and get them damaged.

Well, you start by visiting Halloween/costume stores…and quickly realize that costume stores are terribly overpriced and are completely -shit- quality. We settled on a hooded robe for Mike and a witch’s dress (including hat) for myself. We went as cheap and easy as possible.

When do we get to the part about Green?

Well, now! Just being a witch was going to be too lame of a costume for me, personally. lol. So, I decided to be the Wicked Witch of the West instead. I already had Mehron’s Amazon Green makeup to use from my plan to eventually make Young Justice’s Miss Martian. So, why not go green? 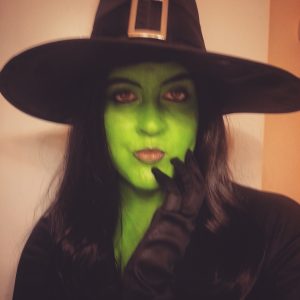 Body/face paint can take any costume to the next level and that was definitely the case with both of my little outfits this Halloween. However, I have heard the horror stories about trying to remove Green body paint after-the-fact. Well, timid-me, I decided to test things about and do some research about diving in head first (literally).

Unlike the Sky Blue Mehron I use for my Andorian costume (Star Trek)…just putting the color directly on my skin (with water of course) and then expecting to be able to wash it off with water and lil soap was a No-Go with Amazon Green.

After some research, I learned that you need to prep your skin with a moisturizer. DONE! I used a lotion prior to painting myself green. This makes it to where the actual color doesn’t end up getting soaked up by your skin. Makes sense! However, my only negative about this was that it made my green a little greasy looking. Not like my normal looking AQ make-up, almost more like grease paint…or oil… 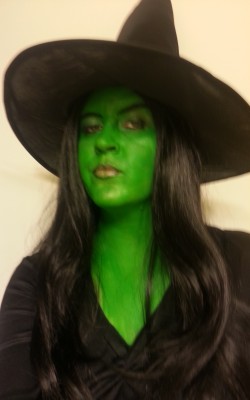 Oh well…it worked out, anyways. It was just for a friends’ Halloween party…and frankly, it was also quite warm outside…which didn’t help at all!

Now to Get it all off!

Below are the photos of the process.. 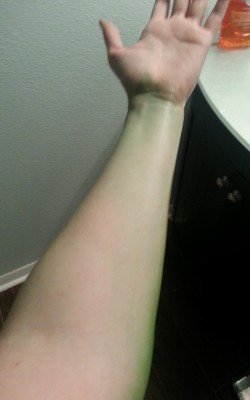 rinsed off and using body wash

So, you’re probably curious as to how I knew that shaving cream would take off the green….Well, you can thank the original Run For Your Life Zombie Run for that. In it’s first year, it had artists from Face Off on the Zombie-making team…Mike and I were covered with everything from latex to blood to fake dirt. Not to mention, also airbrushed. We learned the glory of using both baby oil and shaving cream (lathered) to remove practically anything. Most other things will be removed easily with a makeup removing wipe. All together, I was back to get to my normal, pale self.

Prep your skin…and be prepared to generously cover your body with shaving cream lather and you’ll be all good to go again.

I made the mistake of -not- taking these steps for my second go in Green.

The following weekend, I got a little more creative and bought a dress from Goodwill and painted myself up as the Bride of Frankenstein. I did stitches and highlighting and all kinds of stuff with this one. I probably devoted another hour or more to the make up than  before. I also included my hands this time, too (instead of using gloves). Half way through, I remembered that I didn’t prep my skin…in fact, I had showered ahead of time and had dried my skin out. This made the green sink in quite well. Getting the green off required a shower and then a morning of me sitting in the bathtub scrubbing the green off with Mike’s Axe loofah. My skin was sensitive and unhappy, but I was able to come out the other side my pale self again.

A lot of lessons learned…and I wanted to pass them along. Don’t be afraid of the green…go for it! Just prepare your skin properly or pay for it later. And always keep shaving cream on hand to lather and remove the color. 🙂