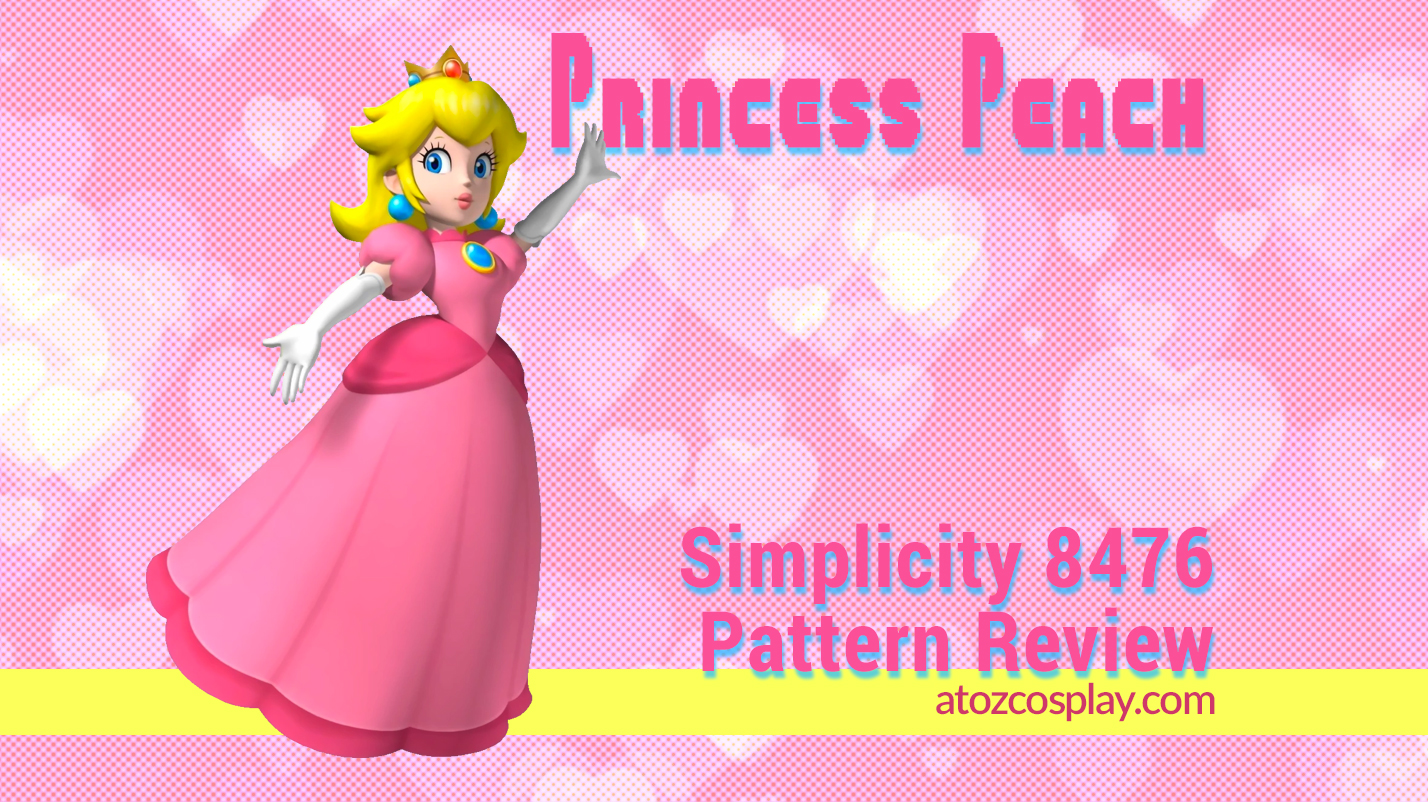 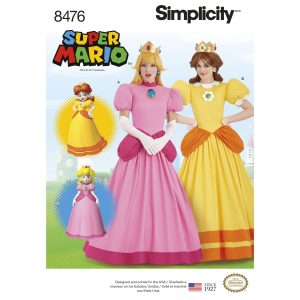 Sometime in 2017 I remember walking around Joann’s and happened upon the new Halloween costume patterns for the upcoming season, I remember how damn excited I was that they had finally come out with patterns for my favorite Mario characters! Mario and Peach had always been a pair up that I wanted to bring to life. And new patterns from Simplicity were gonna make it easy!

Originally, I had considered utilizing Simplicity 2827 to make Peach. It has everything you need! However, not perfect and oh so accurate like this one is! See, for instance, the use of a full bodice as well as the puff sleeves and the overskirt piece.

So, I wanted to write up a blog post to kind of give everyone an overview of what I discovered while utilizing this pattern, what to expect and how we overcame any pitfalls during. 🙂 Enjoy!

I have to say that Simplicity did a great job with this pattern! Accuracy was spot on – it is a rare thing when I don’t have to add or subtract elements from a pattern in order to make it properly fit a character. Then again, I’ve never had the pleasure of having an actual pattern made for that specific character before. What a treat!

Not only was the pattern accurate, but it included some extras that I didn’t even expect. Guides for how large and what shapes the earrings, crown, broach, and crown jewels are were also contained within the pattern envelope. So, thanks to Simplicity you’re fully able to be ready to become Princess Peach OR Princess Daisy. Even down to the flower shape needed for all of the Daisy accessories. I’m telling you, it was so nice to have! However…all things wonderful are not without SOME flaws… 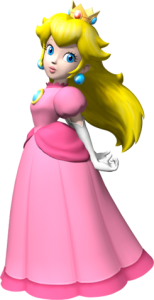 While I may be a rather practiced seamstress, I do still kind of fly by the seat of my pants when it comes to some sewing instructions. I have always felt like I’ve been pretty good at zippers. I tend to do them one specific way that allows for them to be hidden. However, the zipper instructions for this pattern were beyond anything I had ever tried to read before. I understood what they were trying to attempt in the fact that they wanted the zipper to be invisible AND for the lining fabric to be turned under on the inside as well, but I just, honestly couldn’t understand it…I literally waited months on this project because I needed to read those instructions over and over and then just decided to do it my own way. *shrug* Sometimes you just gotta stick with what you know.

Aside from the zipper, I have to say that tailoring the dress was quite difficult, you do not install the zipper until the dress is altogether as one piece…which makes taking in the waist of your bodice or anything of the sort kind of a disaster because the skirt and overskirt are already attached. Luckily I just kind of took it in and made it kind of look like a dart down into the overskirt as best as I could, it made the dress look smoother altogether.

Lastly, I got lucky with the dress for Peach, as it was the perfect length for me without having to do anything to the hem. Unfortunately, there’s no way to know that until you’ve already attached the bottom border…and if you were to hem the skirt before attaching the bottom border, then the two wouldn’t be the same size as was cut from the pattern. So, it’s kind of difficult – so you have to hope that it fits you perfectly after you add a crinoline or hoop skirt to it. It worked out for me, so fingers crossed for you, too!

Lastly ( I know this seems like a lot of cons, but the fact the pros were so strong – don’t let these scare you off from using the pattern – it’s just the nature of the beast and they’re workable cons), Daisy’s double border bottom will give you nightmares trying to follow. I would be willing to give it another look, personally because I didn’t focus on those details since I was making Peach. However, I know that my friends really had a difficult time with it. Just be patient and do what makes sense!

I pretty much followed everything to a TEE other than the installation of the zipper. Unlike most patterns, to fit a specific character, it was perfect right out of the envelope 🙂 Yay!

Sometimes it’s better to just go with what you know. I put the zipper in the way I wanted. I just dealt with the consequences of the lining having to be handsewn thereafter. When attending Megacon, I even ended up going without the lining all sewn into place – time constraints, man…they’re killer!

The full wrap up

It was a relatively easy pattern to follow. It was also a great start to getting back in a creating mode. I got to use my sewing machine for something more than just nursery decor again, finally. lol

Great costume uses for this pattern

Well…duh…Princess Peach and Princess Daisy!  However, you will have to make changes if you want to a version other than the classic. 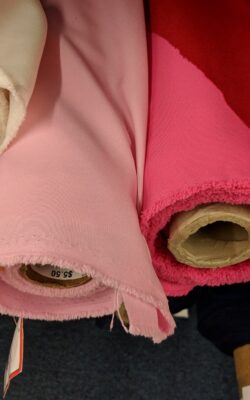 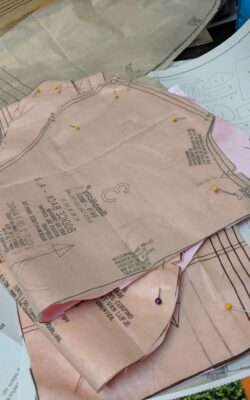 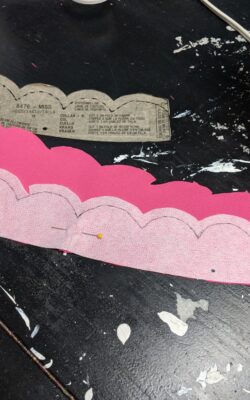 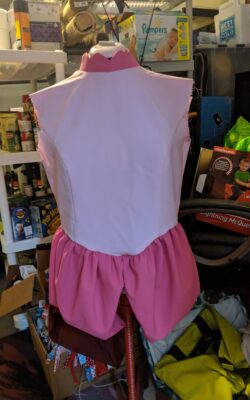 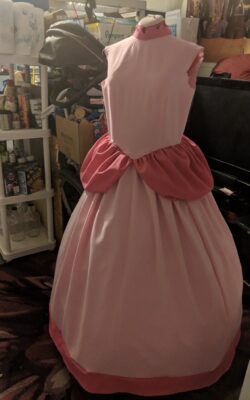 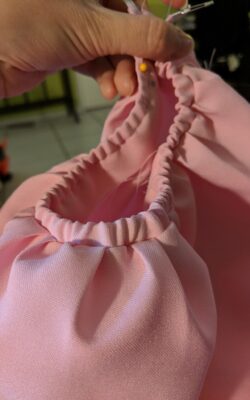 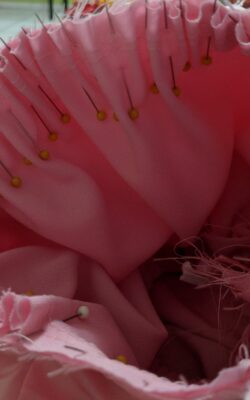 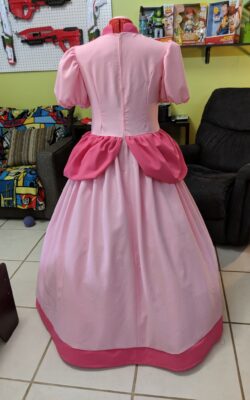 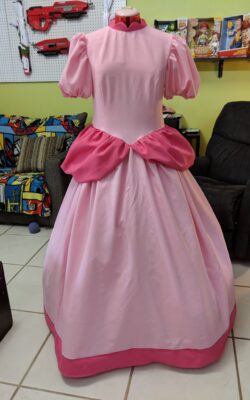