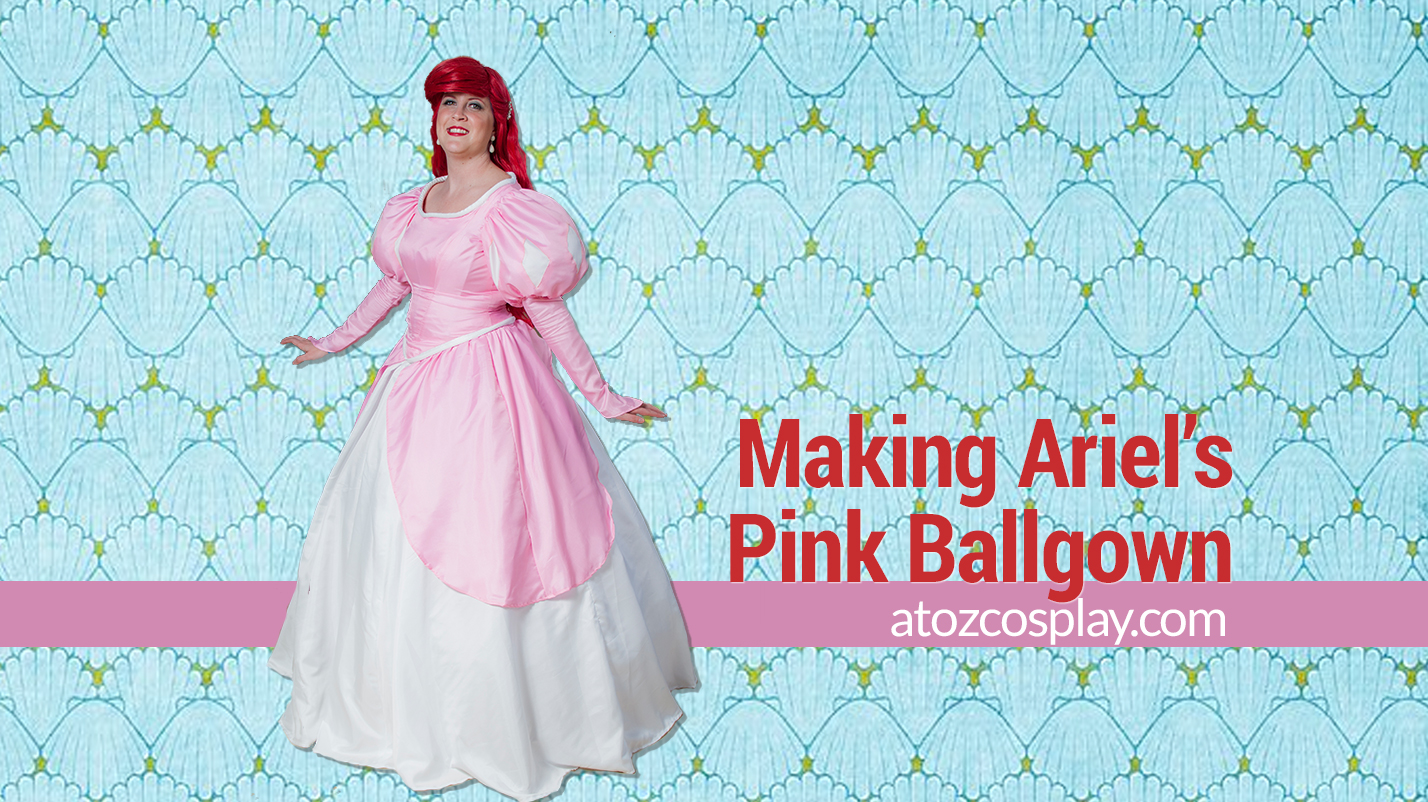 The project was a long time coming. Ariel is by far my favorite princess and I have always wanting to bring her to life. With the charity work that Mike and I do, kids always love to see a Princess…and Ariel would be no different. 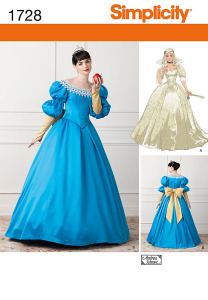 Last year I attempted to start an A to Z series of pattern picks for characters, beginning with Ariel’s Pink Ballgown, since, ya know…A. In this blog post, I focused on the Simplicity 1728 pattern that has a couple of different varieties of ballgowns.

I knew that with a little bit of work, that I could make one of these two options work for Ariel’s Pink Ballgown. I went with the design that is the Blue version and only did one puff on each sleeve and went against utilizing the bow in the back all together.

After creating the dress myself now from this pattern, I still recommend it. It has easy-to-follow instructions and doesn’t weirdly skip around like some Burda patterns do. The only difficult thing is trying to decide how much fabric you actually need, since you’ll be doing things a little different than intended.

I’ll be honest…I’m a pretty thrifty shopper…so, when I found these fabrics on Amazon, I knew that I was taking a chance, but luckily, things worked in my favor. 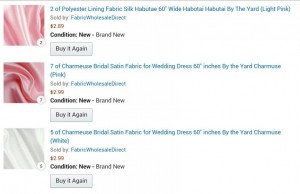 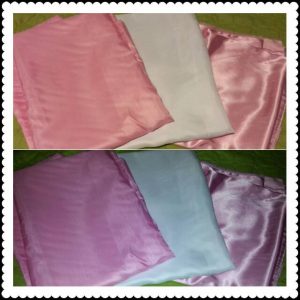 With and without flash

If you’re looking to purchase your own fabric…these are the ones that I purchased : pink Bridal satin for the outer fabric , pink lining fabric , and the white Bridal satin for the skirt. BTW, shipping was super fast! Also, expect to do a lot of ironing. When doing all of the sewing, I made sure to use the non-shiny side for the right sides of the garment. This was so that it would look the right color pink for photos with and without flash. One thing that urks more than no other is for fabric to come off super shiny and cheap (even if it is cheap lol). 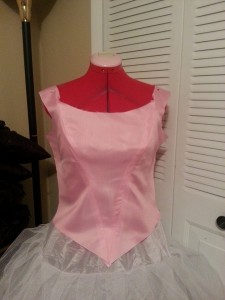 The bodice to Ariel’s pink ballgown was very important to get right. Luckily, the pattern that I had picked out really helped by having a majority of the elements already incorporated…only minor additions had to be made in order to make it accurate. I was also very lucky that the size I went with was a perfect fit (even tho the only time I ended up wearing it to date…turns out I was pregnant and didn’t know it yet).

This was my first time ever messing with boning…it was exciting and scary all in one. I was probably overly cautious through the process. So, what I did is I laid out each piece to cut the proper length according to the pattern guidelines. Then I numbered them from left to right so I wouldn’t put the wrong casing to the right guideline. I also wrote the numbers on both the casing and the bone…because you have to take the bones out in order to be able to sew the casing in place.

My only real issue with doing the boning was that the boning came in a roll, so, it had a curve to it…I wasn’t sure whether it was best to have it curve in or out or if you needed to do something specific to make them straight. Either way, it all worked out. This is the boning that I used 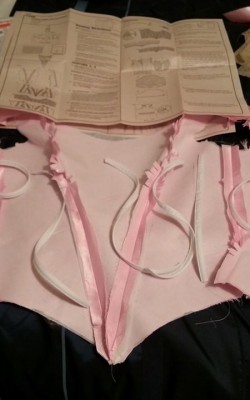 measuring the boning and casings 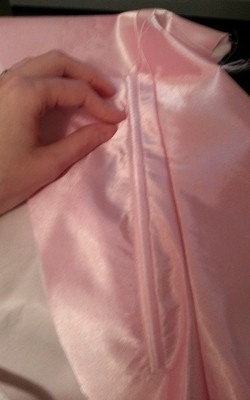 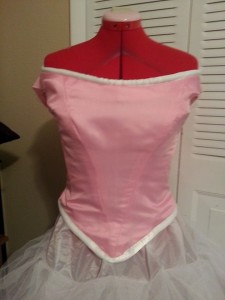 As if doing boning for my first time wasn’t enough…this project was also my first attempt at doing piping. Thankfully, Mike had some experience with this from making his Star Trek Wrath of Khan uniforms, but he really didn’t understand what I was attempting.

Rather than buying bias tape or trying to make my own, I did something a little different. Since I was using satin fabrics already, I decided to purchase the blanket lining satin in white. It worked out great because it was already folded and it was silky to add to the rest of the garment. I used think cording – 1″ piping cord in white.

Application of the piping, I probably did the most difficult way possible…I did both the fabric and the lining and the piping together at the same time with the cording in place. I used a zipper foot because I don’t own a piping foot, this made it easier for me to get as close as possible to the cord with the foot. Thankfully it didn’t end up looking totally amateur.

The diamond cut outs in Ariel’s dress are iconic and not something to be overlooked. The original pattern included puffy sleeves and gauntlets, so it was time to get creative. I made myself a pattern to work off of and then a template to put them all in at the same spacing and size. I placed the white satin used for the skirt behind the pink and cut the pink to allow the white to show through. This was not easy, but very satisfying to finish up. 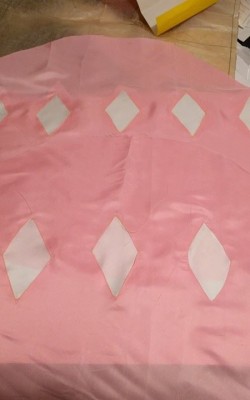 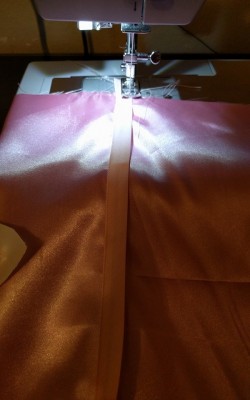 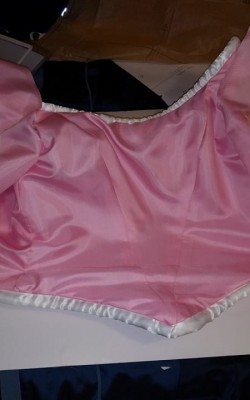 Pinning the sleeves on 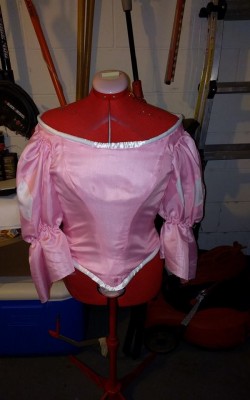 As you can see in the last photo, after the bias take and elastic was used to allow for the puffs to be full, i had some overhang left over. My work around here was that I next made the gauntlets to properly fit around my elbows and wrists (I could have made them a lil bigger so that they weren’t so tight). So, I pushed the overhanging fabric from the sleeves up inside of the puffs and added some filler to make these perfectly puffy. Then, I hand sewed the two together to become one 🙂 Ta-Da puffs and sleeves finished with iconic points on the top of the hands. 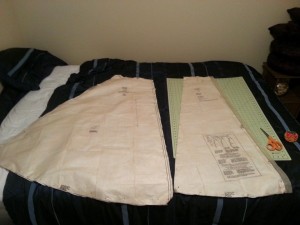 I simply could not believe how much fabric goes into making a full ballgown skirt to cover a hoop skirt. It amazed me!

I’ll be totally honest, the side overlays of the pink fabric for the skirt didn’t quite go the way that I wanted them to. I had played with it enough and was just legitimately tired of trying it. The overlay was gathered at the waistband and I hemmed the edge (which was a pain because it was so curved). Honestly, I wish I could do it over again with more patience.

It was great to bring a dream cosplay of mine to live and it was such a hit at MegaCon 2016! I went around with two of my other friends also dressed as casual princesses, too. I was very happy with how everything came together, even if it was kinda tight at the time. It was nice to find out WHY it was so tight…and to be welcoming our little one into the world in 2017. THEN I hope to be right back in this costume so that I can use it for charity work. The kids love Princesses 😉